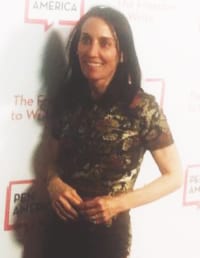 is the author of The Spanish Prayer Book (The Road Theatre Company, 2019-20 season; L.A. Times Best Bet),  AGATHE (2020 New American Voices Award – The Landing Theatre) and Clara and Serra and The Talking Bear, among other plays.

Named the 2020 Honoree Playwright by the Santa Barbara-based Playfest of New American Plays, 2020 recipient of the Playhouse Creatures (NYC) Rodriguez Award, a three-time Eugene O’Neill semi-finalist (2017, 2018, 2020), and one of the top 21 (from a field of over twelve hundred) for the Moss Hart and Kitty Carlisle Hart New Play Initiative, her work has recently been presented and/or is upcoming at Playhouse on the Square, The Landing Theatre, Chameleon Theatre Circle, The Road Theatre Company, The Blank Theatre, and elsewhere.